Wow, that was a fun evening. Vicki Halliday also known as @vicki_mostly_sews on Instagram is one interesting lady 😝

Vicki kindly agreed to talk to us about her day job... A Wardrobe Supervisor at the Guildford School of Acting... At tonight's Dressmaker's Social.

I decided I would try and live Instagram her talk. So here are my frantically typing and photo's of Vicki's wonderful talk! Thank you Vicki!!!

Getting ready to start... 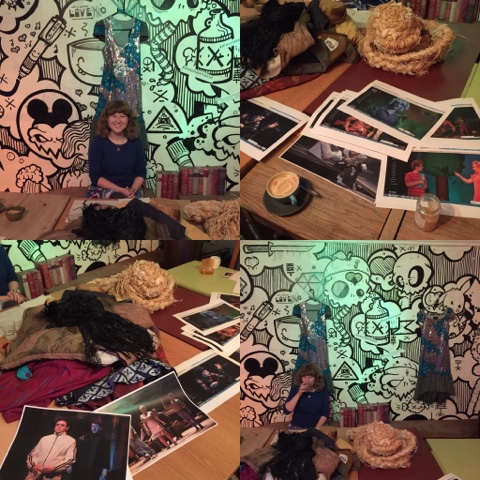 We're off... Theatre Wardrobe Supervisor @vicki_mostly_sews is telling us about herself. From science to theatre degree and into costume she is now head of wardrobe at Guildford school of acting GSA. Her job is seasonal. Works in a university working with young learners and professionals and works on 20 shows in an academic year. Most of the work is third years working real theatre so the students know what it's like in the real world. Job is doing everything necessary to hit the deadline. 200 costumes for the Our House production. Lots of planning and organising. 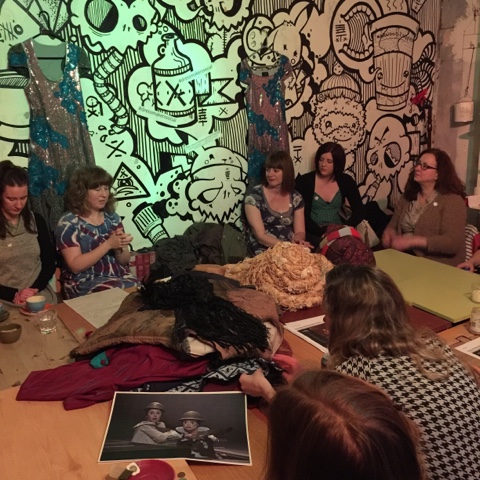 Vicki started her costume career as a dresser at Glyndbourne. She has worked as a costume assistant at the English National Ballet and worked at the Royal Opera House. Whilst there she was able to go through their stock of costumes in Wales and make giant umbrellas out of crinolines. 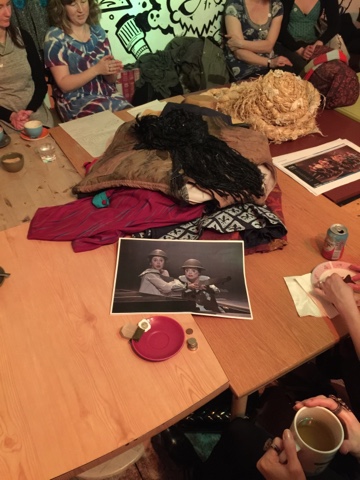 "We have a big stock of costumes. Different sections. Wired stuff goes in panto. Every show and every day is different. Use as much as we can from stock. Hire things, military etc. Buy things or make them. Steer away from making as production times are short. Costumes have to perform too so there are lots of problems to solve. Then comes the laundry and maintenance and packing up!" 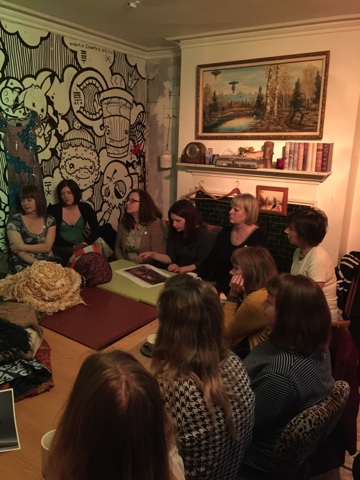 Name dropping time. as requested by Maria... She has dressed a member of S Club 7 or Steps when she worked on a production of Grease. She has also helped Charlie Dimmock into a dress and Michael Aspel a jacket.

Disasters... Things might not work on stage under lights etc. Need to be pragmatic and not emotional! A girl got stuck in a dress and rather than cutting the zip the dress was cut. Had to be fixed for the next night 😳

Touching time! Sequin dresses are from Performace of into the woods. Two needed as one was a prop. 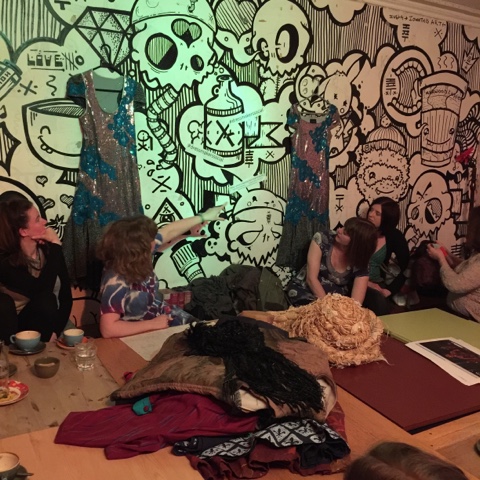 A wig for Rapunzel, with a detachable plait. Made of Raffia and soaked in fire retardant that took 3 days to dry. 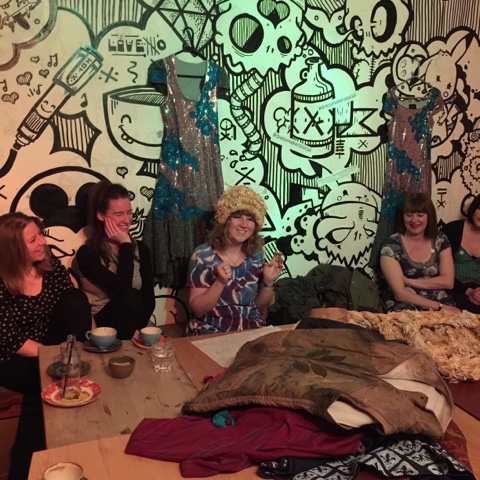 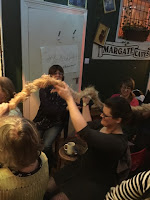 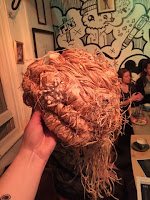 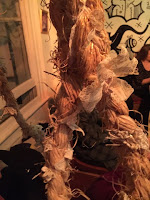 Clothes from a Shakespeare production including hand printed dresses and customised gilets. 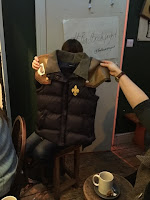 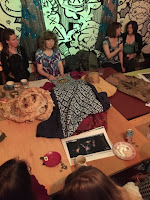 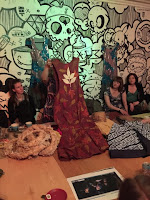 A dress made by Vicki for The Importance for Being Ernest. 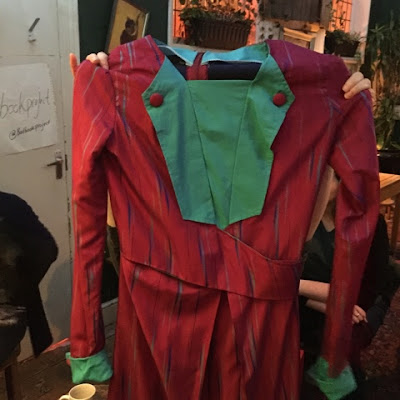 Thank you so much Vicki for your awesome talk.

Vicki has guest posted on the blog before and you can check out her refashioners post here!

Blimey time is flying!
Time for a little round up of #miymarch16 that is 2/3 of the way through!
I am continually surprised by the amount of people who are taking part and posting some amazing interpretations of the themes.
This what days 10-18 looked like... 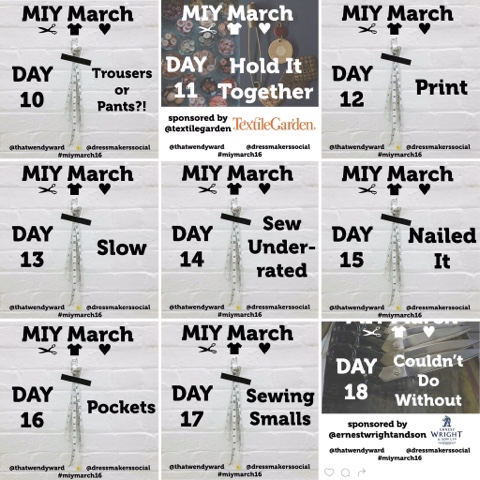 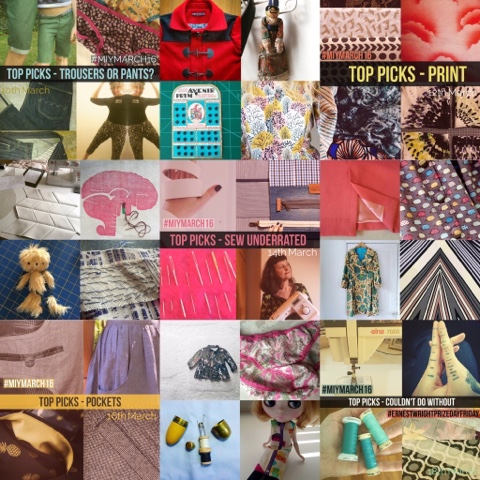 To check out the photo's daily, log on to Instagram and search for #miymarch16
Posted by Unknown at 13:48 No comments:

We are half way through #miymarch16 and for the first time I am a little stuck on choosing a photo for the theme.
Today it's Sew Underrated. 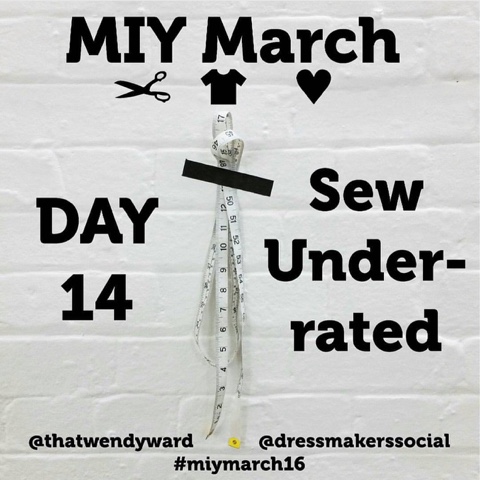 And my first thought was "tacking" so I posted this... 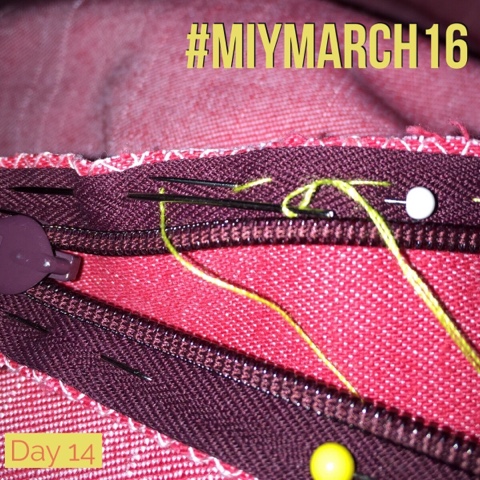 The more I thought about it though the more I kept coming back to the reason I started Dressmaker's Social, a monthly meet up group in Brighton. It was to meet other like minded people, people who sew their own clothes and like to talk about patterns and fabric as much as I do.
So my second post for Sew Underrated is this blog post. And my answer is Sewing Friends, whether in real life (I am lucky to have met lots of lovely sewists in person at the meetups) or online via Instagram, Twitter and Facebook. And the support that we give each other. It's been said many times before but people who sew really are the nicest people!
So here's to you guys and a look back at some of the meetups.... 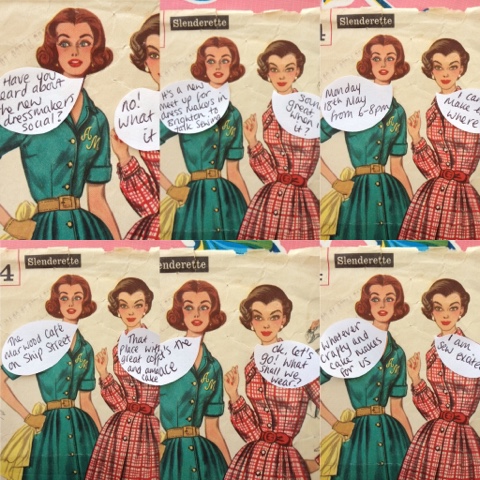 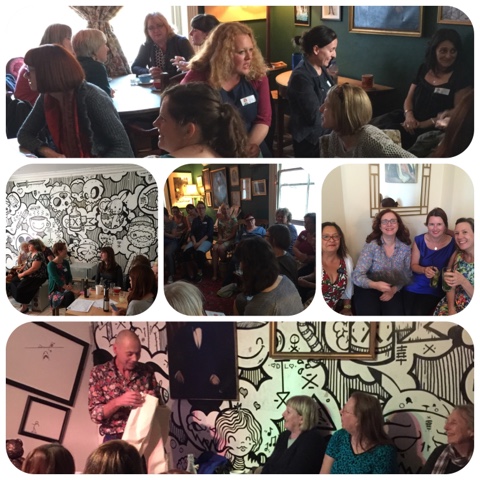 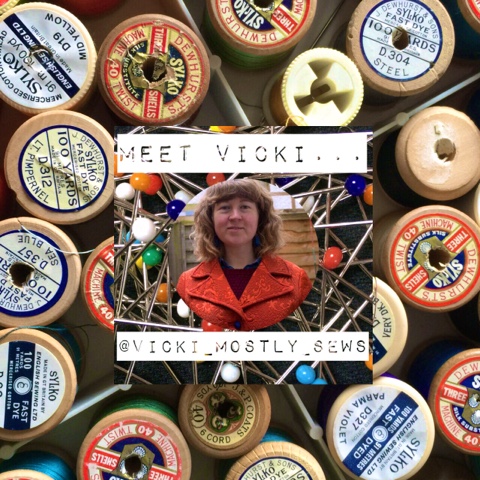 Vicki Halliday! Vicki works in theatre costume as a Wardrobe Supervisor and she will be answering your questions! But we need them in advance so send them to me at dressmakerssocial@gmail.com and I'll pass them on!
Looking forward to seeing you there!
Posted by Unknown at 02:49 No comments:

This March I have been running #MIYMARCH16 on Instagram with Wendy Ward of MIY Collection, MIY Workshop and author of The Beginners Guide to Dressmaking.
And what a 10 days! The participation in #MIYMARCH16 has blown me away. I am loving seeing everyone's interpretations of the themes and I am feeling very inspired to get on with some sewing that I have been considering for a while, so Ginger Jeans here I come!
This is what the last 10 days has looked like... 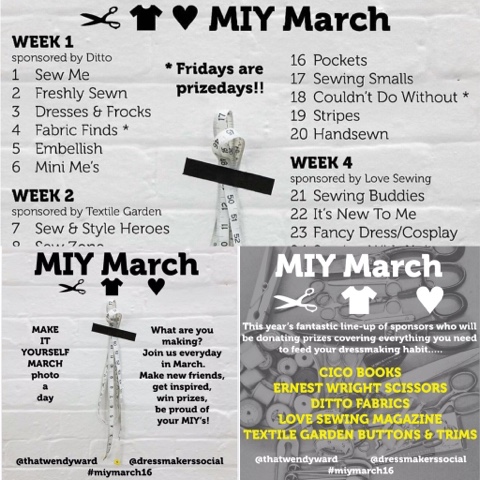 Each day has a different theme and we started off with Sew Me on day 1...
Here I am! Hello! 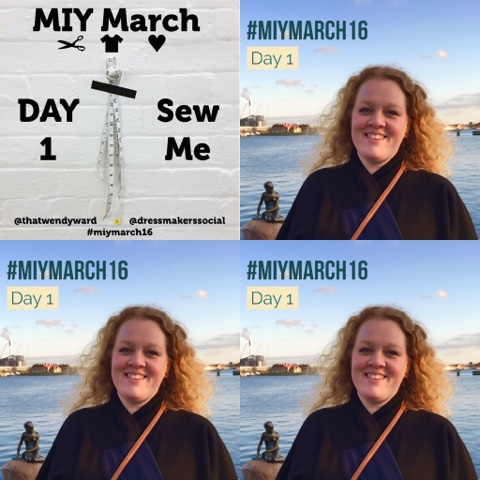 Wendy and I post the daily prompt in the morning but there are usually already photo's ready and waiting to be looked at. This is the result of people in different time zones taking part which is very cool. With the help of social media the world really is a very small place. 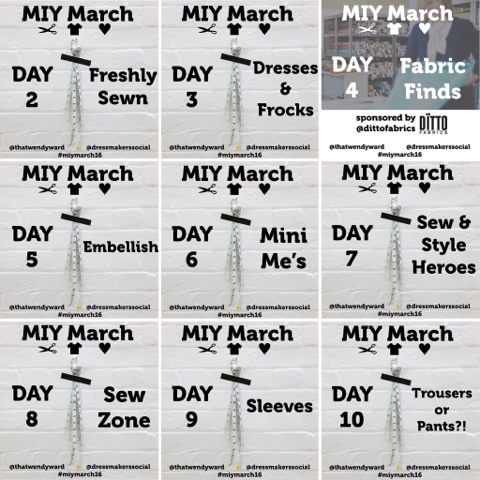 Then we post our photo for the day... Here are mine... 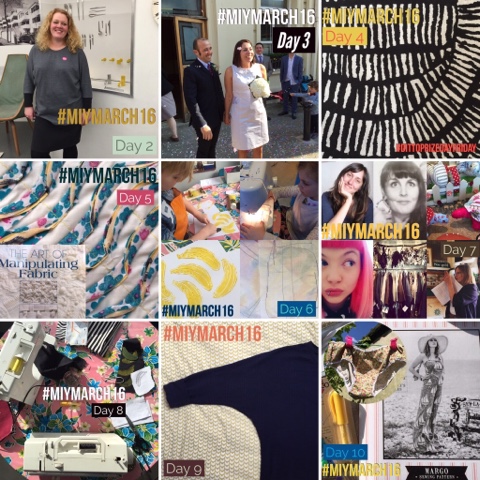 Then we take it in turns to choose our favourite four that we announce the next day... 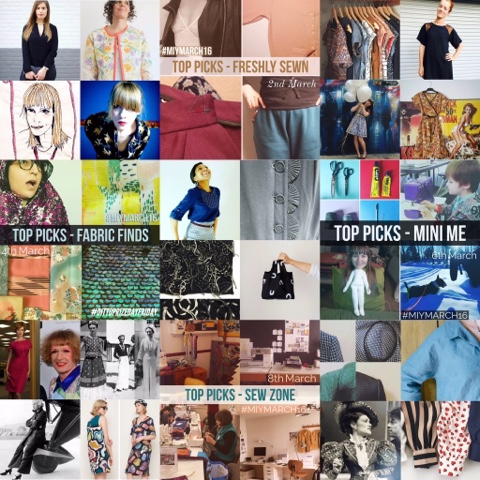 Friday's is prize day, first up was a voucher from Ditto Fabrics. Tomorrow's sponsor is Maggie from Textile Garden who sells the most amazing range of buttons. Looking forward to seeing how you hold it together tomorrow and checking your pics out on Instagram!
P.s. You can join in at anytime! All you have to do is, have an Instagram account or create one, follow me, @dressmakerssocial and Wendy, @thatwendyward and use the hashtag #MIYMARCH16
P.p.s. Check out Wendy's blogpost about #MIYMARCH16
https://wendyward.wordpress.com/2016/03/09/miy-march-16-week-one-round-up/
Posted by Unknown at 13:30 No comments: