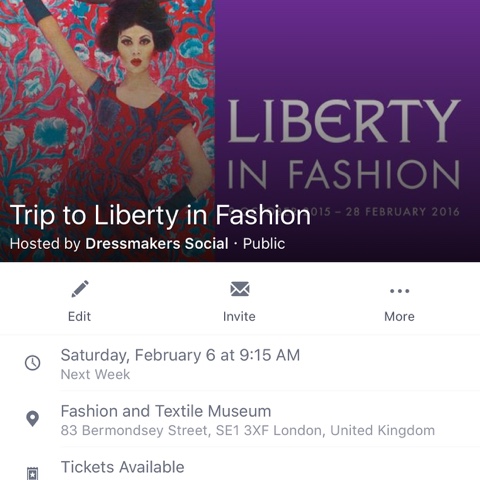 Fancy joining us on a trip to Liberty in Fashion at The Fashion and Textiles Musuem in Bermondsey, London?
We are going to the morning session on Saturday 6th February. Meeting at Brighton Station at 9.15 and aiming to get to the Musuem for the 11-2 session.
Book your tickets for the train on the national rail site in advance and we will get our tickets on the door.
Any questions, pop them in the comments!
Emma
Posted by Unknown at 01:40 No comments:

Croianna - A Collector of Stories

I introduced Croianna Bradshaw on Monday night as someone who has been inspiring me with her tales of sewing for the past two years. As she talked to a packed room of fellow dressmakers (thank you all so much for coming along) and even though I have heard some of the "tales" before I was in awe and inspired by her experiences all over again.

Here are her notes for those of you who couldn't make it, live too far away or who just want to hear it all again (like I did)! Thank you Croianna and over to you... 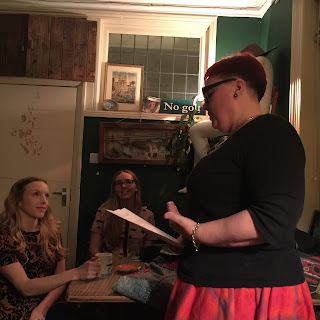 I was delighted to be asked to speak at the dressmakers’ social, but I am not someone who has particular expertise and I know that there were, in the room, people who are able to do all the things I can do so I had to think about what I could offer.

What I came up with was my enthusiasm, my own perspective and perhaps, most importantly, the privilege of being the first of the group to tell my story - I hope we are going to hear from more people in the future.

I am a collector of stories in every aspect of my life. I was a therapist, which is all about other people’s stories. I now collect and write stories as a funeral celebrant, an occasion that is perhaps the only time a person’s story will be told. Of course, stories are not always told in words. Sometimes the things we make say more about us than words could.

I am very much a project maker, not a process maker – even knitting two socks can be a bit of a challenge. Once I have one that I feel is good enough, making another feels like hard work. I like to find a technique and get it right, even if I am never going to use it again. I might never make a Dorset button again – but I have the satisfaction of knowing that I could.

Born in the 50s, I grew up in a house where being able to sew and knit was an expectation – for a girl. I don’t remember learning to do either.

My mother was a dressmaker and milliner; I remember seeing her going out in beautiful New Look dresses that she made herself. In later years she became an ecclesiastical embroiderer and learnt tailoring.

‘O’ level needlework put me off for a while and nearly ended my sewing career completely. Back then you had to make the thing they gave you – in my case it was a shift dress in ghastly blue woollen stuff that I would never, ever have considered wearing. I don’t like rules unless there is a reason for them that I can understand. They insisted that every seam was pinned, then tacked and then machined – even the straight ones. I still only tack when I really, really have to. In the end I put my seam ripper right through the garment in frustration and got a very poor mark for my exam.

That said, I finish everything very carefully even if I know it won’t show, which is about knowing for myself that it has been done properly. I knot threads off carefully and trim them back, and try to make sure that patterns match.

In the mid 70s I met Ian and Marcel. They were a Canadian couple who had come to England to study and to launch their careers as makers of hand-painted silks. From them I learned to use aniline dyes with gutta-percha resist and to do very fine finishing work. This meant making tiny roll hems – the width of the needle – and fine buttonhole edging. We were three people, living on two dole cheques (Marcel was French Canadian and so not entitled), in a damp basement. It was one of the best times of my life.
They went on to have some real success before they, very sadly, both died in the early days of the AIDS epidemic. Their collection went into the permanent fashion collection at the V&A.

Several years ago I found a picture of a piece of Marcel’s work in a lingerie book produced by the museum and then I saw a wedding dress that they had designed in an exhibition there. I may have had a hand in the finishing of it, if not it brought back memories of many hours spent working on similar pieces.

Meanwhile, I had baby – this was the 80s and I made outfits for her – there were frills, lots of frills. I am slightly embarrassed to say that there were even matched mother/daughter outfits. This went on until we hit the age of the Lion King leggings. They were a present from a friend and she loved them. After that it was about fifteen years before I was allowed to sew for her again!

When I think about the things that inspire me it is often the story of a project that is important. I have a coat made from the fabric that Tibetan monks wear. It was bought from the shop in Labrang on the Tibetan plateau where the monks go to buy their supplies and brings back wonderful memories of being there. It is lined with a Thai silk from my mother’s stash, which I inherited and so is a tribute to her too.

I also inherited a small collection of old samplers – the pieces that little girls were required to do to show that they had mastered the embroidery skills expected of a young lady in years gone by. There is a particular one I have only seen a photograph of but I would love to own, which reads: ‘This piece was worked by Mary Pitt, who hated every stitch of it’. I loved it because it was so beautifully executed and yet made clear that it was done under protest.

Through trying lots of new techniques I had amassed a pile of little samples of various bits of beading and embroidery. I also had some fragments of other people’s work, mostly from India, which were all in a box, unseen and unloved. They are now part of a highly decorated denim jacket, which I think of as my sample piece. It has become more elaborate – and heavier – as time goes on but I enjoy wearing it. 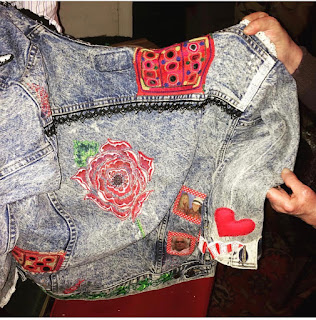 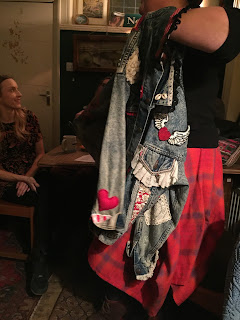 One of my latest interests is corsetry. I love corsets because they combine wonderful fabric, findings, precision making and a long and interesting history. They are also fun to wear when it is for a special occasion and not a daily expectation. I have done a couple of courses and I am still just beginning to explore their potential.

I am greatly inspired by Indian embroidery. Every region has its own designs and some of them are really beautiful. The V&A Fabric of India exhibition, which has sadly just ended was wonderful. 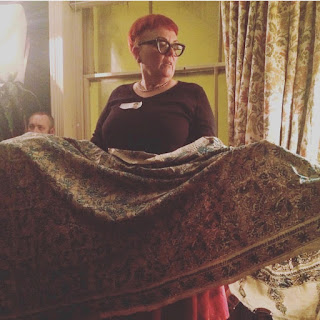 I love all the paraphernalia of textile craft - fabrics, yarn, haberdashery, beads and tools. And I am very lucky indeed - I live with someone who doesn’t mind having to shift a sewing machine to find a place to put a plate and eat dinner!

My challenge to myself for 2016 is going to be to overcome my unrealistic fear of working with knitted fabrics – what’s yours?

I love the jacket and the Indian hand embroidered pieces are exquisite. Both are examples of considerable work that have slowly become something wonderful.

My challenge for 2016 is to take my time with my sewing, stop rushing just so that I can wear it and think about sewing in a mindful way. Oh and to finally start the bra making class I purchased on Craftsy a year ago! What about you? Pop your challenge in the comments and let us know how you get on via our Facebook and Instagram pages using #dressmakerssocialchallengeyourself 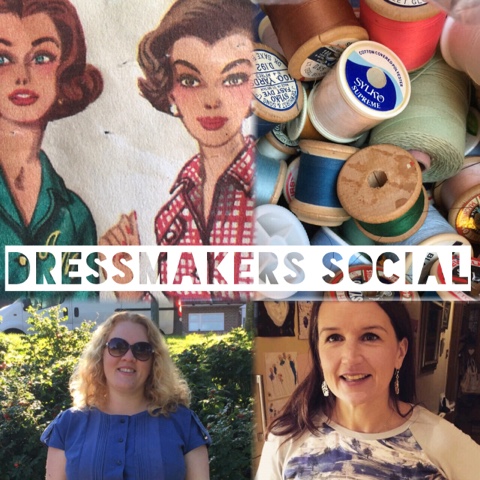 BREAKING NEWS: After months of feeling a little unfulfilled by Dressmakers Social I am excited to announce that I have a co-organiser to share the fun and work load with. Laura aka @lauralime on Instagram. Together we will be organising lots of fun dressmaking events. More details to follow...
Posted by Unknown at 01:42 No comments: 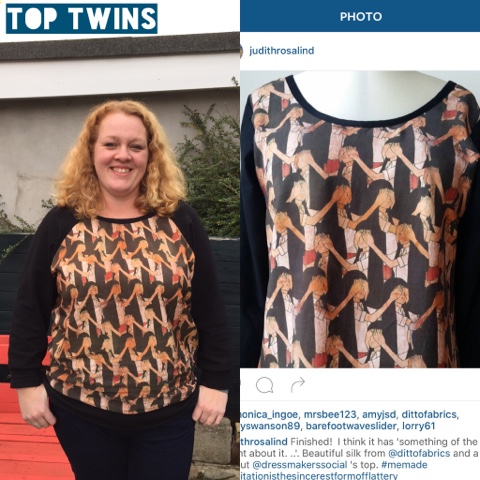 I had a new experience yesterday...
I discovered via Instagram that someone had made a sweatshirt out of the same fabric as me.
I have to admit I felt a bit miffed about it at first. One of the reasons I sew my own clothes is to have something unique. I know commercial patterns are there for people to make the same garments but people's individual fabric tastes make the garments different. Now there are two sweatshirts the same and I felt a bit surprised to see it.
Then I read her #imitationisthesincerestformofflatterry
And thought that it is pretty cool that something I made inspired somebody else to make one too.
So now we are top twins and that is ok with me.
Posted by Unknown at 01:18 2 comments:

I didn't realise it had been so long since I last posted... oops!

The craziness of kids birthdays and christmas is behind me and I can now get back to some dressmaking, yay!

Let's start off the year with a meet up. Who is free on Monday 18th January? 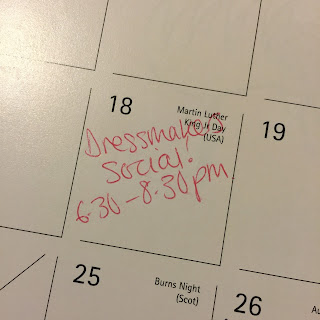 Meet at The Marwood Coffee Shop, 52 Ship Street, Brighton for a New Year Natter and to plan some dressmaking excursions in 2016!

I have a BIG question for you all....

p.s.
To cover meetup and other advertising costs I have to start charging £2 per head at each meet up.